His father took him for apparent knowledge to Syed Ubaidullah Shah in Multan. It is narrated that Syed Ubaidullah Shah started teaching him but got surprised when Hazrat Bahadar Ali Shah (R.A) recited the whole lesson before the teaching. Syed Ubaidullah Shah called his father and told the whole story. His father asked him about how he learnt all the lessons? Syed Bahadar Ali Shah (R.A) replied that he learnt all these lessons through inspired knowledge (Ilm-e-la-duni) during his stay at shrine of Hazrat Sultan Bahoo (R.A). His father took him to the shrine of Hazrat Sultan Bahoo and left him there for service.

Hazrat Sultan Bahadar Ali Shah (R.A) used to stay most of the time at Shrine of Hazrat Sultan Bahoo (R.A) where one chamber was designated for him. During his life period, seven custodians of Shrine passed, all of those respected him very much and used to take his advice in difficult times. He got married according to Sunnah of Holy Prophet SAWW but later on separated from his wife with mutual consensus. He has no descendent. It was because he wanted to keep himself busy in worship of Allah Almighty and duty at shrine of Hazrat Sultan Bahoo (R.A) and therefore separated from all those affairs which could potentially become hurdle in his way.

was given instructions to have “King Clothing” (Shahi Libas) and to ride on a male (strong) horse.

Hazrat Sultan Bahadar Ali Shah (R.A) was also a great poet of “Saraiki”. His poetry is guidance for desirers of Allah (Talib-e-Mola) to achieve the recognition (marifat) of Almighty, the sole purpose of life. A very special aspect of his poetry is that he gives arguments from “Holy Quran and Hadith”. His poetry provides guidance to Talib-e-Mola for all the stages that one faces in the path of Allah Almighty. The reader of his poetry feels comfortable while travelling the Mystical discipline. He has written poetry in different beautiful rhythm and tunes due to which it has special effect on readers as well as listeners. Respect in the court of spiritual mentor, humbleness, faithfulness, truthfulness and ardent-love are specially focused in his teachings. In respect of Hazrat Sheikh Abdul Qadir Jilani (R.A), he says:

And for Hazrat Sultan Bahoo (R.A), he says:

His poetry has a distinct status in literature due to teachings of “faqr”. His teachings consist of discussion about ultimate reality and essence of “Tasawuf”. Sultan-ul-Faqr6th Hazrat Sultan Muhammad Asghar Ali (R.A) often instructed his disciples to keep his poetry in their routine study.

Travelling to different areas for the sake of spreading the teachings of Islam has been a common feature of great Sufis and Hazrat Sultan Peer Bahadar Ali Shah (R.A) was no exception. He travelled across different areas along with a large number of disciples and Khulafa. He preached “marifat” and ardent-love of Allah Almighty.

Hazrat Sultan Bahadar Ali Shah (R.A) died in 1934 and his shrine is situated near Shorkot on Jhang road, Jhang. His “Urs” is celebrated every year in the last days of February. The peace of heart felt on his shrine speaks itself of his spiritual status. 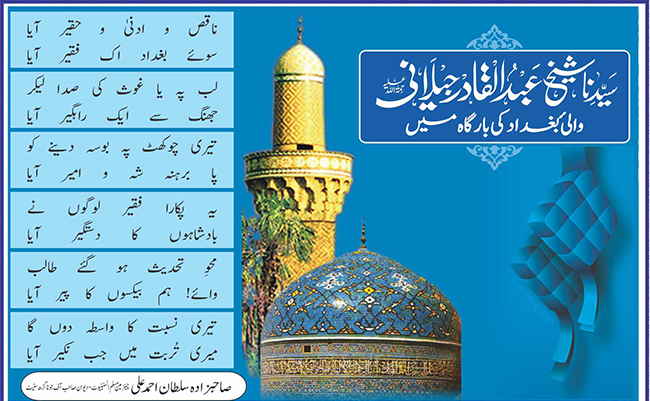